Typed statement describing Michael Kallmann, Noel Michael McKinnell, and Edward F. Knowles of Columbia University as a participating team in the Boston City Hall Competition to design a new city hall building in 1962. The statement contains biographical details of the three architects, including their previous professional experience, and was possibly part of their submission materials to the competition. A handwritten note at the top of the page indicates the team was selected as the winner of the competition.

KALLMANN, McKINNELL and KNOWLES 121 East 54th Street New York, New York
Three members of the Columbia University faculty teamed in submit-ting a design for the new Boston Government Center building. One is a native of Germany, another a native of Great Britain, and the third a native American from Brooklyn, New York. The dean of the trio is Gerhard Michael Kallmann, born in Berlin, Germany in 1915, educated in England, and well known as a very perceptive critic and writer about modern architecture as well as for his own creative work. He studied at the Architectural Association School of Architecture, London, England, 1935-1940 and won the Architectural Association Diploma, Associate Royal Institute of British Architects. Professor Kallmann, a
member of the Columbia University faculty as an assistant professor of Architecture, has been design critic at the Institute of Design, Illinois Institute of Technology, on the faculty of Cooper Union, New York and a visiting critic at Cornell, Yale and Washington University of St. Louis. He has been a contributor to Architectural Forum and Architectural Review. English-born Noel Michael McKinnell, 27, is a graduate of Manchester (Eng.) University and Columbia University where he is a tutor in first year, design and at the Graduate School of Design. He has trz..vr,led extensively in Europe and has been associated with Percival Goodman in the FDR Competition; Carson, Lundin and Shaw of New York and Charles R. Colbert of New York. Edward F. Knowles, 32, Brooklyn native with a Bachelor's degree in Architecture from Pratt Institute in 1951, teaches architecture at Cooper Union and at Columbia University and has traveled extensively and studied throughout Europe, Canada and the United States. Among the firms with which he has been associated are Philip Johnson of Connecticut, Edward L. Barnes and Unger and Unger. In association with the Kump Associates of Palo Alto, California, he designed the $2,500,000 Pine Manor Junior College of Chestnut Hill in Greater Boston, and has designed projects in New York City and Florida. 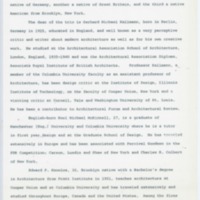