...an article reprinted from the Sunday, April 2, 1967 Boston Globe describing the features of the new City Hall in downtown Boston's Government Center, the nation-wide competition, its architectural significance, the role of I. M. Pei's plan for the site, etc.; copies of this item were in the BRA collection.. 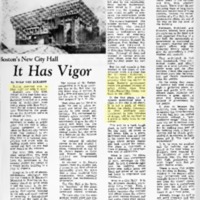